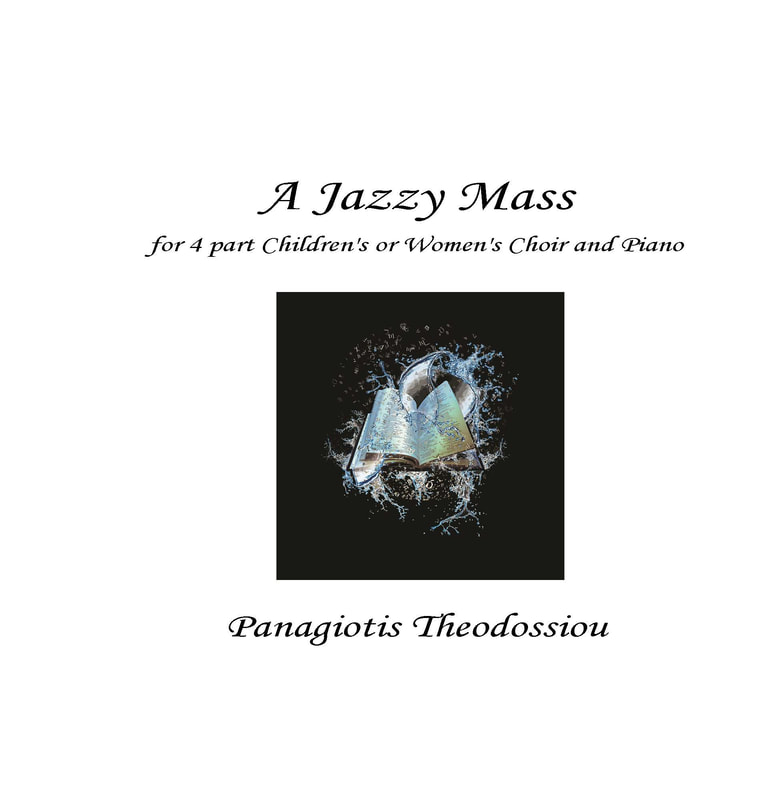 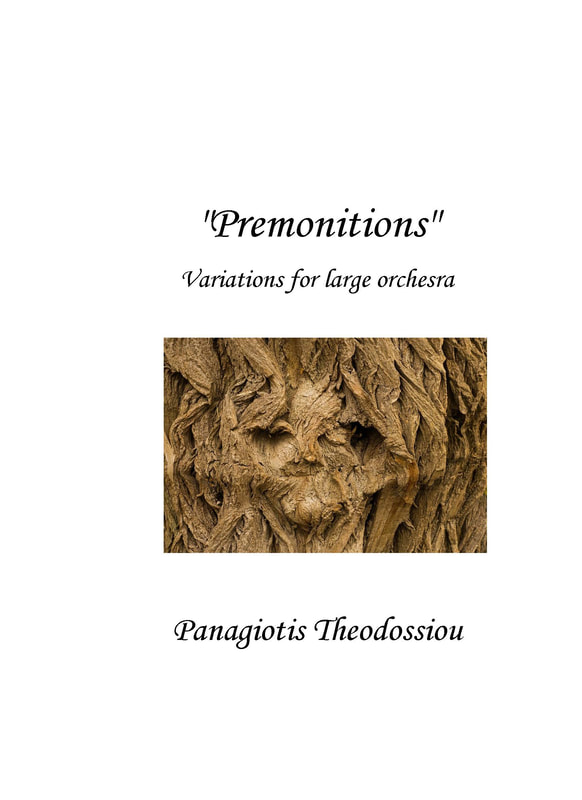 Work written in 2018 a thesis for composer's postgraduate studies in Musical Department of Ionian University ("Composition for Vocal and Instrumental Ensembles").
It is based on the, under the same title ('Premonition'), poem by the 19th century British-Canadian poet Robert William Service (1874 - 1958). Point of departure is the eternal conflict between light and darkness, hope and despair, vision and nightmare, spiritual formation and inner confusion, being together and being apart, past and future, life and death. Leading by love (eros), a series of sudden thoughts and premonitions and the composer's inner visions on Service's text is a vehicle, a canvas for this composition. It follows a multilanguage style between serial-atonal and tonal idiom. It consists of an introduction which is repeated variated at the end as an epilogue and nine variations, each of a different character - independent but following one another without a pause:
1. Introduction, Sudden Thoughts (Severo)
2. Var.I. Towards the Light (Lento ambiamente)
3. Var.II.Nightmare - Shadows' Chase (Allegro deciso)
4. Var.III. Hope (Lento mystico)
5. Var.IV. Moonlight Wandering (Valse noire) (Poco piu mosso)
6. Var.V.Vision i, An Imaginary Procession (L' istesso tempo)
7.Var.VI.Vision ii, Butterflies - An Unexpected Love Affair (Valse d'amour) (Allegro)
8.Var.VΙI. Depression and Relief (Illusion) (Grave)
9.Var.VIII. Contemplation Waltz (Passacaglia) (Con moto)
10.Var.IΧ. Confusion - A Broken Heart (Moderato)
11. Finale. Last Thought (Tempo primo) 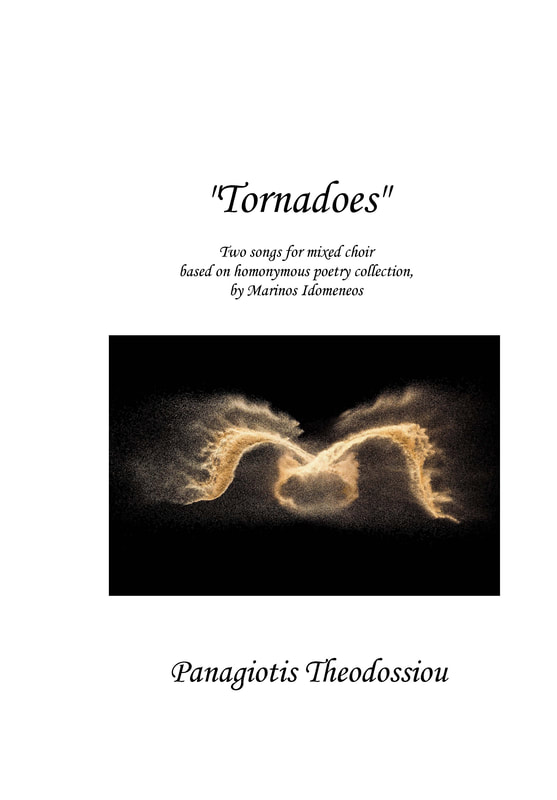 Based on the, under the same name, poetry collection by Marinos Idomeneos the work is written in tonal idiom and dedicated to  Giannis Idomeneos, baritone and conductor of Youth Choir of Heraclion, Crete.
The parts:
Ι. "Μην Μπιστευτείς του Φεγγαριού" ("Don't put your trust in the Moon") (Malinconico)
II. "Λάθος Πορεία" ("Wrong Route") (Andante rubato)

For score:
www.sheetmusicplus.com/title/tornadoes-for-mixed-choir-digital-sheet-music/21845818?narrow_by=tornadoes
www.musicaneo.com/sheetmusic/sm-511794_tornados_for_mixed_choir_op_70.html#511794
"Overture"
​for woodwinds and brass (2012) op.51

I. Processional (Moderato con moto, maestoso)
II. Funeral
III. Triumphal
The work, a commission by three ensembles ("Q innegal", "Just Brass", "Too Bass") was written for and performed  in collaboration by them under the composer’s direction in the closing part of their concert in Athens on 2012 ("Parnassos" Concert Hall, Athens).
The three parts suggest the hero's  procession to the battle, death and mourning, and at last triumphal hymn up to heaven.

For score and parts:
www.sheetmusicplus.com/title/overture-for-three-ensembles-digital-sheet-music/21844925?narrow_by=overture
​www.musicaneo.com/sheetmusic/sm-511734_overture_for_three_ensembles_op_51.html#511734
"This Body"
for mixed choir (2011) op.48 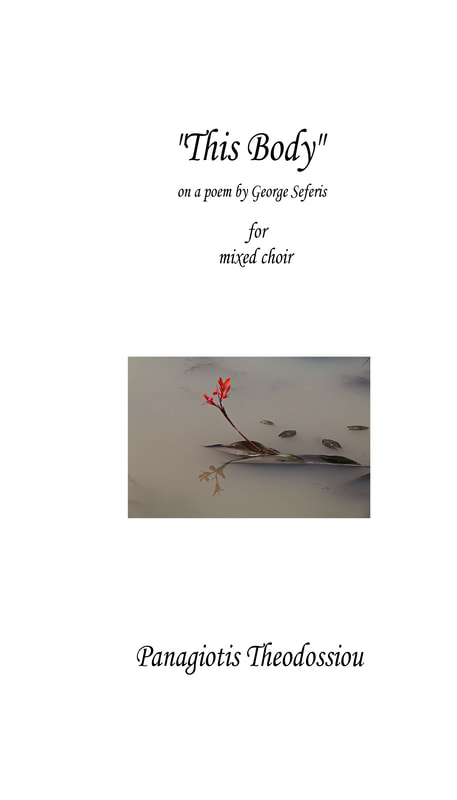 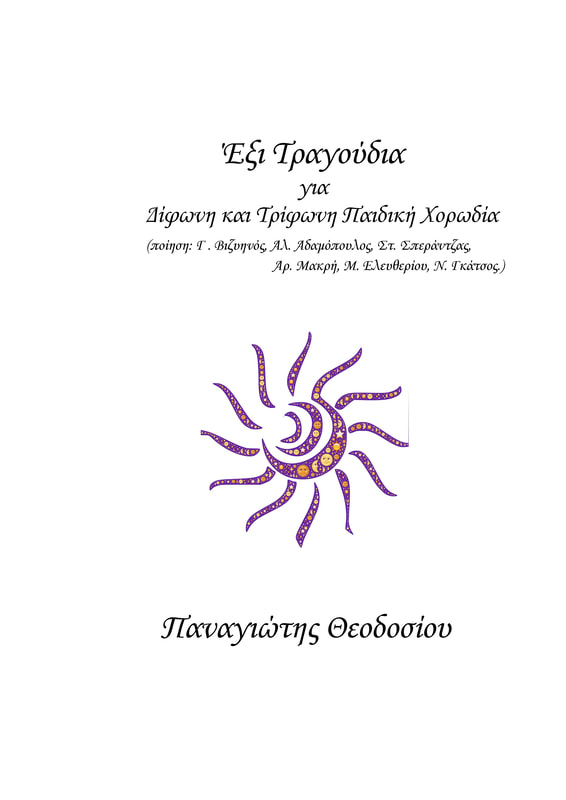 For score and parts:
Please address to composer's email:
panagiotis.theodossiou@gmail.com 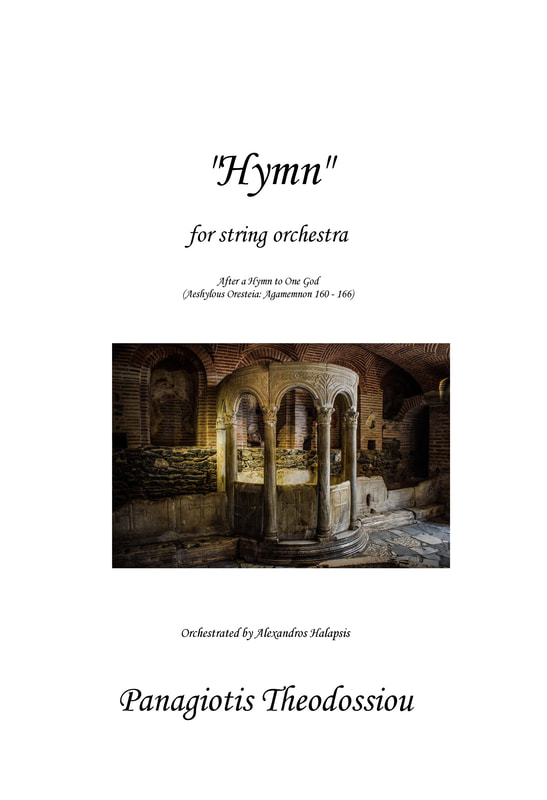 "Hymn" for string orchestra op.37c is an orchestration by Alexandros Halapsis from an original by the composer (“Aeschylus Hymn to One God” op.37), a 4-part vocal setting of a fragment from “Agamemnon”(“Oresteia”) by Aeschylus (V,160-166). Characterized by a chromatic melody and of remote progress harmony, the work attempts a tribute to the style of Gesualdo da Venosa. It was a commission by the Thomas Tamvakos Greek Composers Archive and it has been performed at the “Hellenic American Union” Theatre by the vocal ensemble “Philodos”, in 2007. Transcribed for flute, violin, and cello in 2021 as “Three for a Hymn” op. 37b.

For score and parts:
www.sheetmusicplus.com/title/hymn-for-string-orchestra-digital-sheet-music/22343967 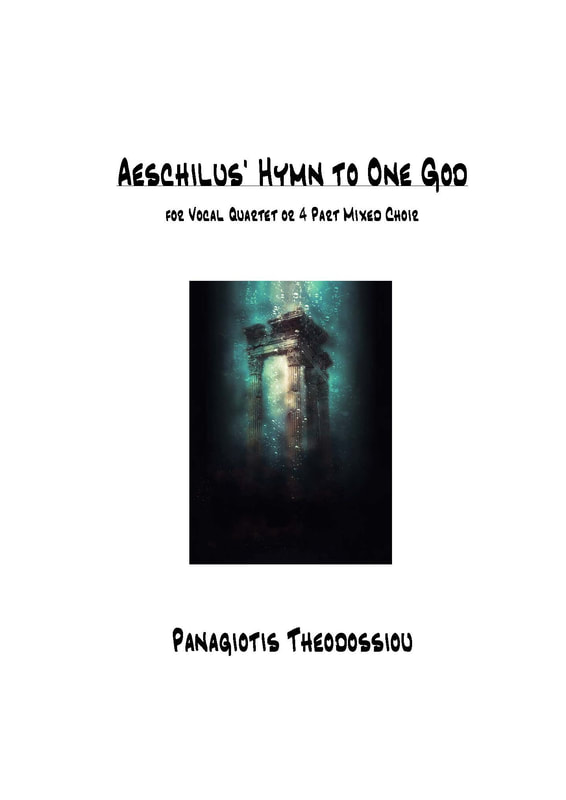 A setting of a fragment from “Agamemnon”(“Oresteia”)  by Aeschylus (V,160-166). Characterized by a chromatic melody and of remote progress harmony, the work attempts a tribute to the style of  Gesualdo da Venosa.  It was a commission by the Thomas Tamvakos Greek Composers Archive and it has been performed at the “Hellenic American Union” Theatre by vocal ensemble “Philodos”, in 2007. Transcribed for flute, violin and cello in 2921 as "Three for a Hymn" op.37b.
For score:
www.sheetmusicplus.com/title/aeschilus-hymn-to-one-god-for-vocal-ensemble-or-mixed-choir-digital-sheet-music/20780552?narrow_by=hymn
www.musicaneo.com/sheetmusic/sm-338925_aeschilus_hymn_to_one_god_for_vocal_ensemble_or_mixed_choir_op_37.html#338925 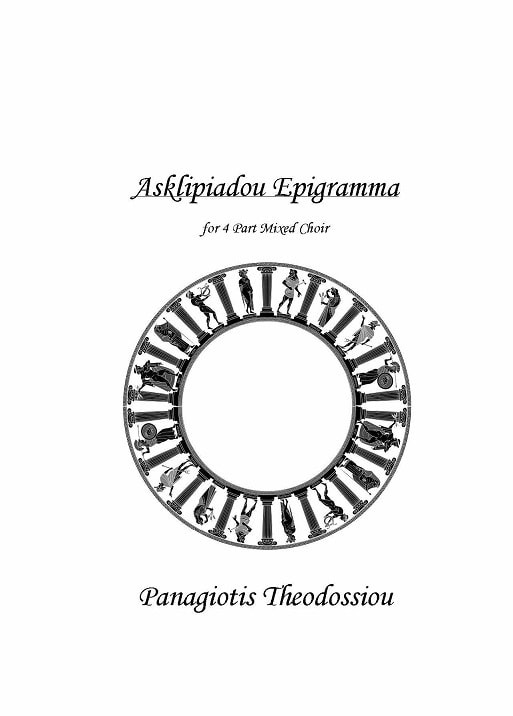 It is a setting of an ancient “epigramma” of erotic-religious character by the Hellenistic era poet Asklipiadis from Palatinian Anthology (V, 64). The work was a commission by the Thomas Tamvakos Greek Composers Archive.

For score:
www.sheetmusicplus.com/title/asclipiadou-epigramma-digital-sheet-music/21395381?narrow_by=asklipiadou
www.musicaneo.com/sheetmusic/sm-369016_asclipiadou_epigramma_op_36.html#369016
​“The Flying Hat” Scenes from a Fairy Tail
for orchestra (2006) op.34 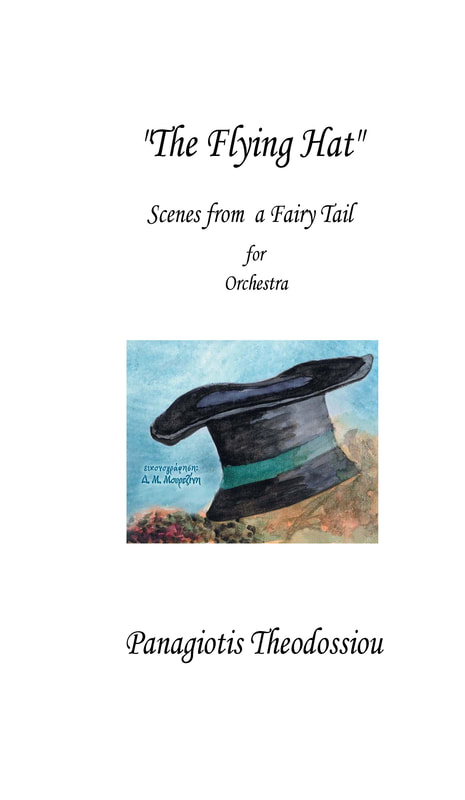 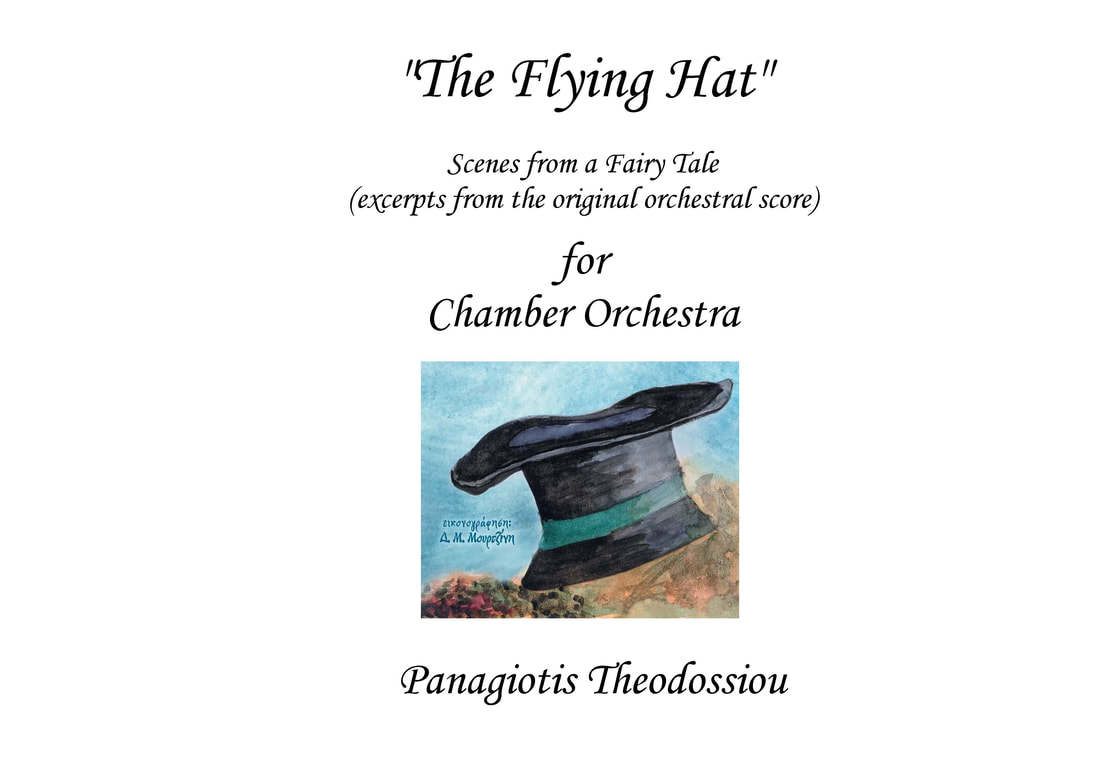 a. “A Little Fanfare”
b. “The Hatland”
c. “Dad, the Giant Hat”
d. “Dance of the Little Hats”
e. “The Wind”
f. “The Flight”
g. “Farewell”
A fairy tale full of inspiration written by a child was the stimulus for the creation of this polytonal work for orchestra. With humor and innocence, piquant orchestration and cinematic use of the sound, the work is dedicated to the child, Michalis Tillianakis and to Eleutherios Geitonas, director of “Geitonas School” who gave the idea for this project.
The work has been transcribed for piano, 4 hands, for the "Duo Pianismo" recital in "Benetatou" Cultural Center of Psihiko in 2010 and for wind quintet for the "Q innegal" Wind Quintet Concerts in Athens in 2011 ("Attikon Odeion"Conservatory, Art Gallery Café, Athens, Perigiali Theater, Korinthos). Excerpts of the work has been performed by Psychiko Youth Orchestra conducted by the composer at Arssakeion Educational Institute Theater in 2016. 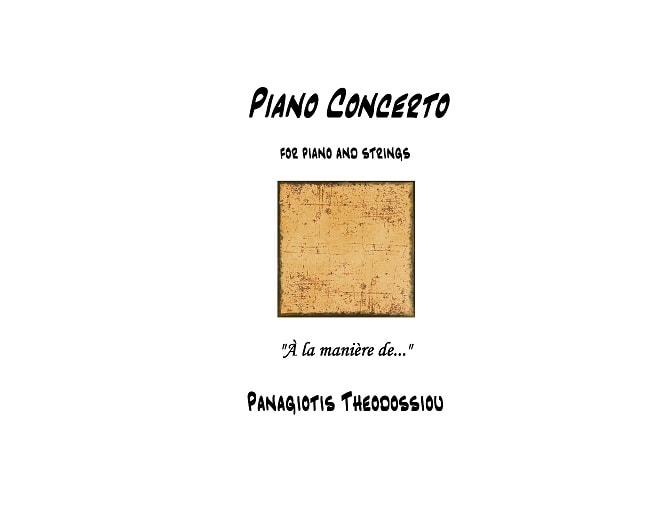 The work is written in the classical form of a concerto and follows a neoclassical idiom. The three parts are respectively dedicated to:
α. Johannes Brahms – Dmitri Schostakovitch,
β. Bella Bartok
γ. Sergei Prokoffiev – Paul Hinthemith – Johann Sebastian Bachbeing a study of each composer’s style .
The whole work is dedicated to pianist Konstantinos Papadakis. The 3d part has been performed by Lorenda Ramou and Orchestra of Colours under the direction of Miltos Logiadis at Benaki Museum Cocert Hall, Athens in 2006. 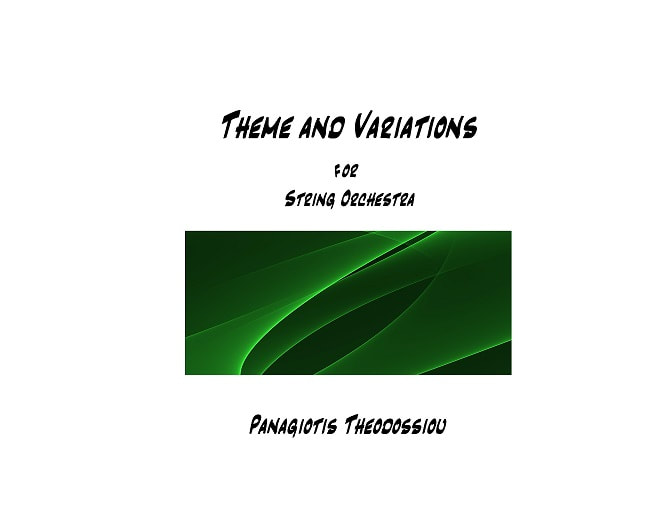 The work is written especially for the composer’s final composition diploma and has been his second attempt to write a work in a large scale (the first was a cello concerto - fantasia).
The parts:
1.Theme: Andante espressivo
2.Var. I: Agitato con moto
3.Var. II: L' istesso tempo, Misterioso
4.Var. III: Waltz funebre, Allegretto
5.Var. IV: Andante sostenuto
6.Var. V: Allegro molto
7.Var. VI: Andante semplice
8.Var. VII: Tempo di waltz, Allegro
9.Var. VIII: Jazz Polka, L' istesso tempo
10.Var. IX: Adagio maestoso
11.Var. X: Tempo primo
12.Finale: L' istesso tempo
The theme, on which ten variations lead to the grandiose  finale,  is written by a composer’s  good friend, Nikos Drelas. The strict polyphonic writing of  the earlier serial works as well as the free homophonic style of the last almost  tonic are here all together in a almost progressive idiom. The programmatic nature of this composition coexists with the absolute musical sound form. Titles of variations like “Waltz funebre” or “Jazz Polka”, in an austere musical text give the point for a new direction in  composer’s creative thinking. Parts of the work have been performed by Philothei - Psychico Youth Orchestra under the direction of the composer at Benetatou Cultural Center in October 2014. 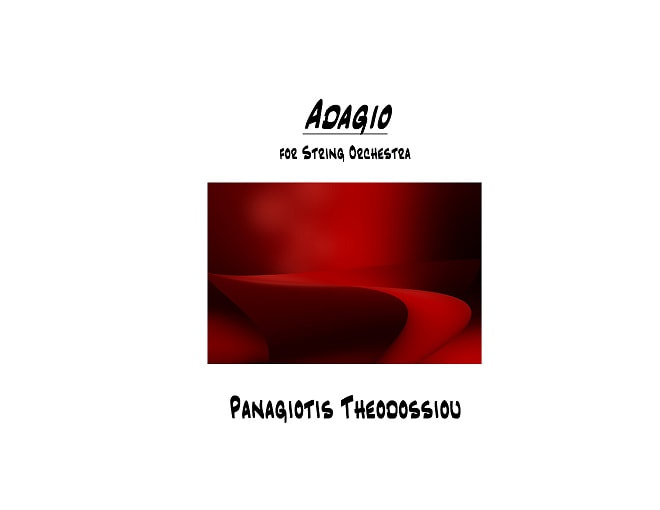 It is a rearrangement of  “Phos Ilaron”, for mixed choir (1984) The string writing reveals another aspect of the expressive possibilities of this early work. The work was performed by Psychiko Youth Orchestra under Yiannis Protopapas musical direction at Arssakeion Educational Institute Theater in 2017. 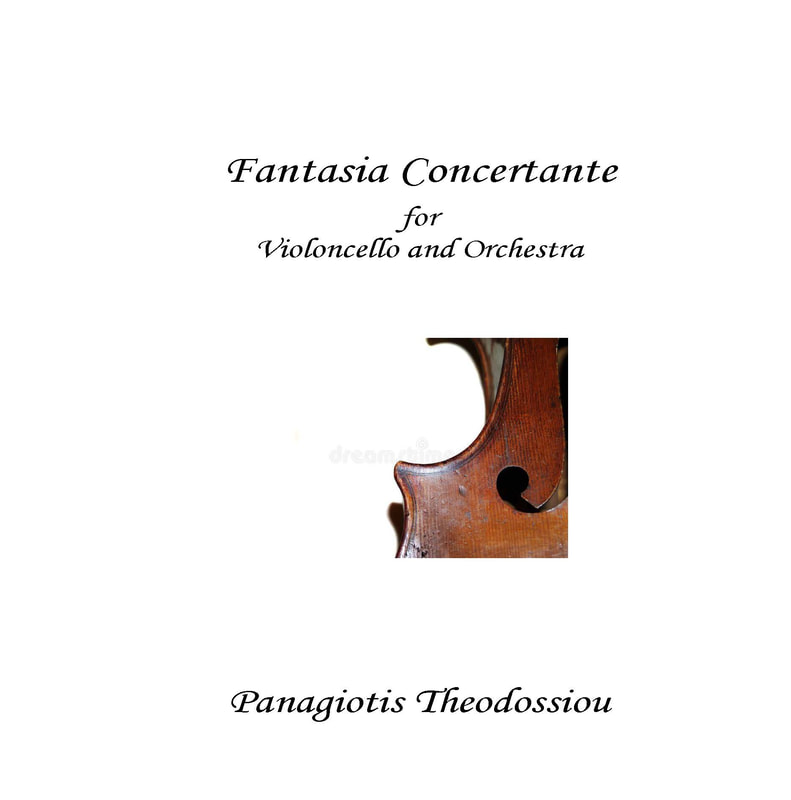 The almost traditionally tonic idiom of the work is a turning point for the composer’s thinking to more simple forms and easy to comprehend musical language. The tempos (Maestoso con moto – Poco meno mosso – L’ istesso tempo ma  espressivo e tranquillo – Lento – Tempo primo)  and the overall character is one of a romantic concerto. It is dedicated to Manos Hatzidakis and  composer believes that it has something from him and his music.

For video:
https://studio.youtube.com/video/SN9Sio2bFHI/edit
"Romanza"
for large oboe and strings
​(2003) op.24 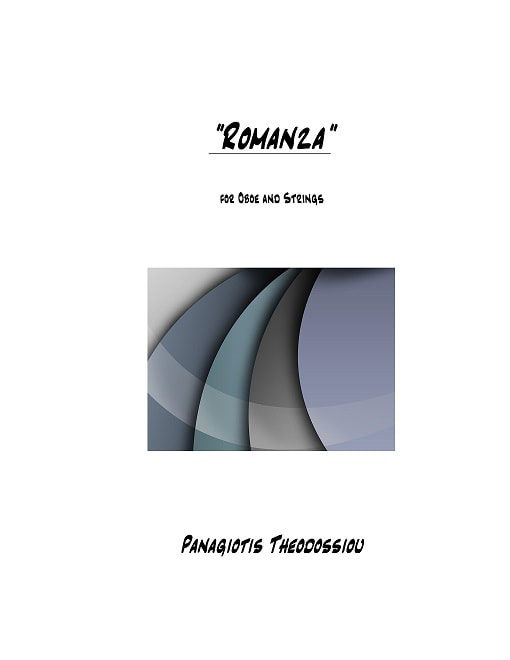 Incidental music for the narration of the novel “Eros Iros” by Alexandros Papadiamantis  for a CD production by Geitonas School.  A romantic and lyrical composition in the form of the Lied. The work was performed by oboe soloist Isidora Kopsida and Psychiko Youth Orchestra under composer's musical direction at Psychiko Catholic Church in 2016 and by oboe soloist Stella Nikiolaidi and the same orchestra by the musical direction of Emmanouil Lorentzos in Athens Conservatory Concert Hall in 2018. 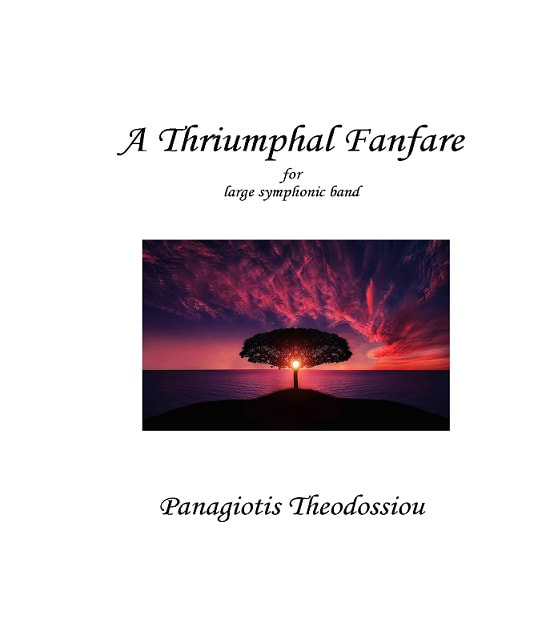 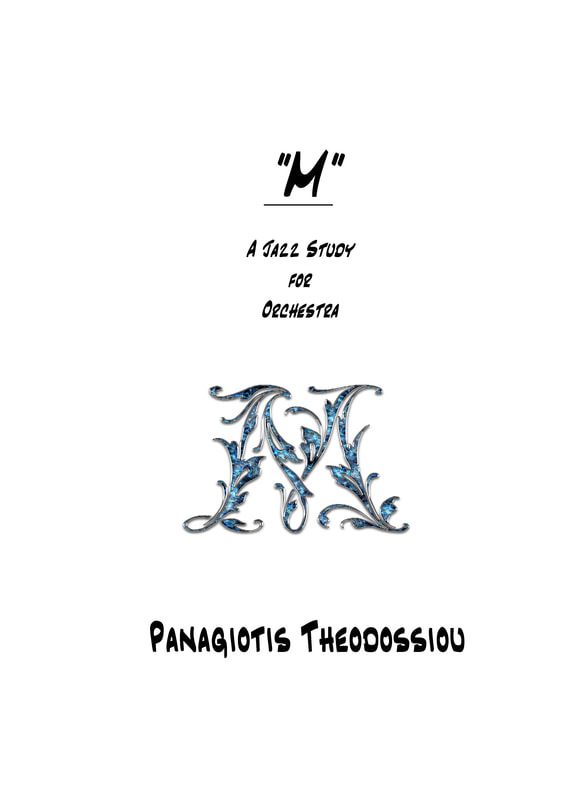 A symphonic study in jazz idiom dedicated to composer's wife, Myrto.  From the  composer’s collection  “Music and Vision”. 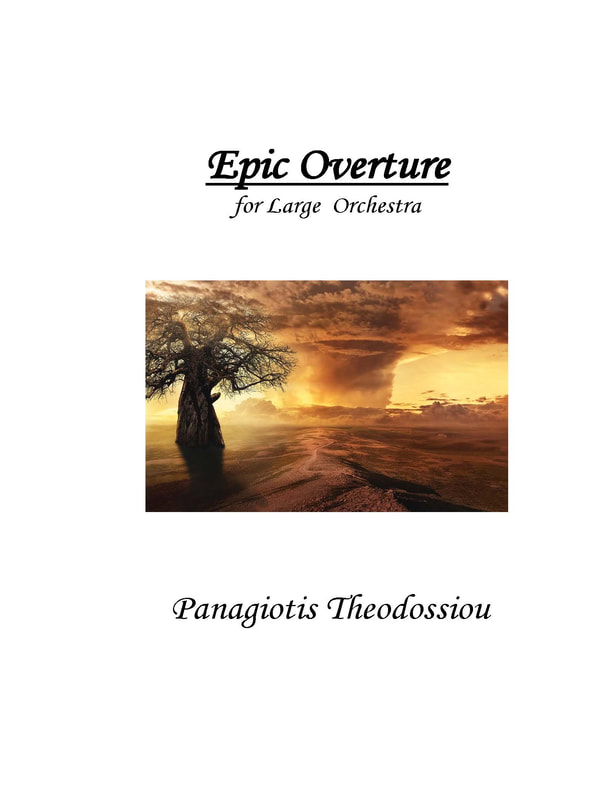 An orchestral overture of epic-romantic a character written for a hypothetical overproduction. From the  composer’ s collection  “Music and Vision”. 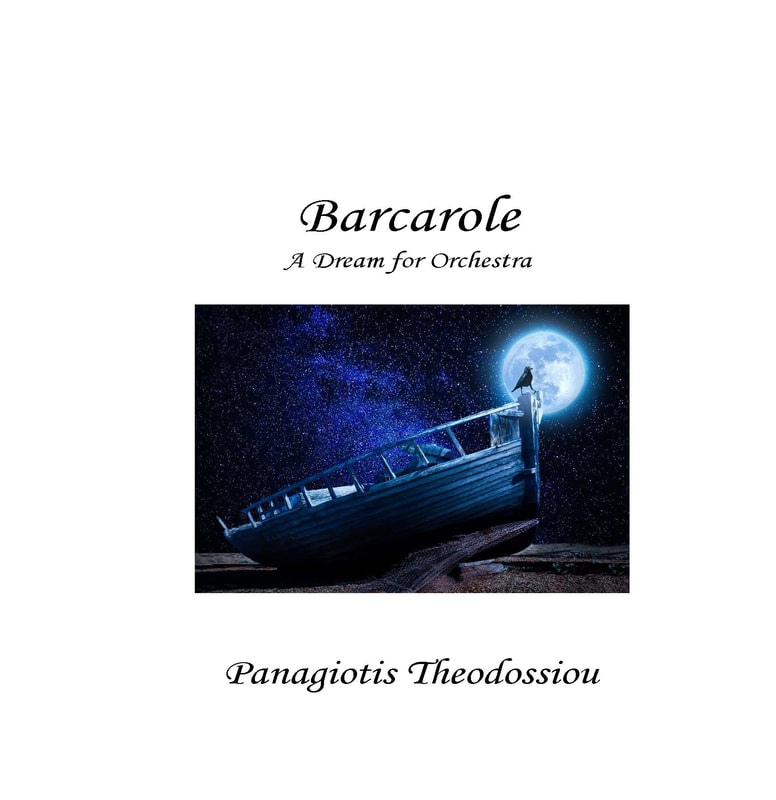 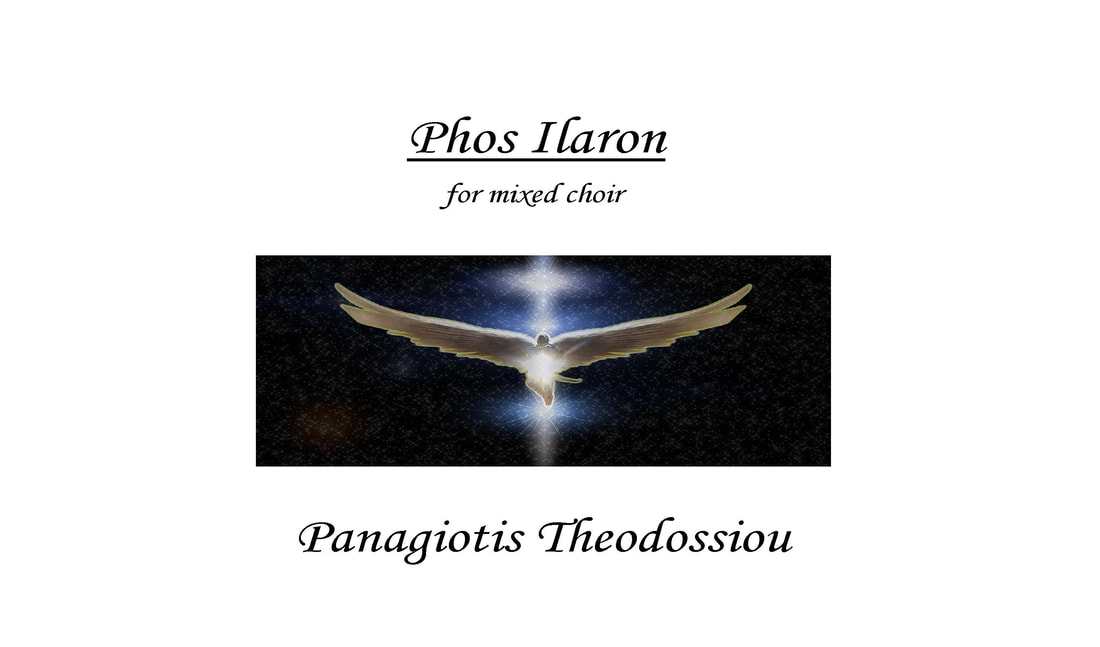 The  first, in chronological order, work of the composer, the result of his theological quest. It is a setting of an early Christian era hymn known as “Epilihnios”, which is in use today in the Orthodox ritual.  Written in a rather chromatic style, having no relation with the melodic line of the traditional hymn, the work attempts to express the intense agony and passion at the beginning of one’s prayer, up to the final “apatheia”, the inner sense of fulfillment in his soul. A state of being without any passion as a consequence of divine energy, the action of divine light (“phos”). The Adagio for string orchestra (2005) is based in this work.